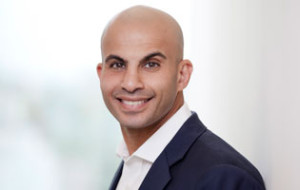 Dr. Masri specializes in the diagnosis and treatment of non-surgical sports and other musculoskeletal injuries in both the adult and pediatric population.

With the help of top-notch physical therapists and trainers and an on-premise physical therapy center, he seeks to provide his patients with a one-on-one personalized treatment from the time of diagnosis until “return to play.”

He understands that each patient’s treatment plan should be tailored to the individual’s lifestyle and capabilities.

Dr. Masri has been involved with the northern New Jersey sports scene since attending Paterson Catholic High School, where he was a varsity starter on the baseball and football teams. Prior to attending medical school at Ross University, he played American Legion baseball and had an opportunity to play for a NJ semi-professional football team.

In 2003, he received his Internal Medicine degree at UMDNJ in Newark, NJ. Following his residency, he was accepted into a very competitive fellowship program in Primary Care Sports Medicine at Jersey Shore Medical Center where he was able to learn from one of the founding fathers of this new and growing field of Medicine. He also worked as an assistant to the Rutgers University team physician and was on the sidelines of some exciting football games, including the Orange Bowl in Miami, Florida. He has covered numerous special events including the NCAA men’s Basketball Tournament, Big East Track and Field Finals, US Masters Swim Meet and the NYC Marathon. He has also worked as a sports physician covering the Olympic Developmental Soccer Program for New Jersey’s finest young soccer athletes.

Prior to opening his practice in Sports Medicine, Dr. Masri worked in the Emergency Room at Hackensack University Medical Center, where he still holds medical staff privileges. Dr. Masri has committed himself to the philosophy that a sound mind and body are quintessential to success in the athletic arena. Who understands this philosophy better than a physician who is also an athlete?

Please fill out this form to learn more about how Masri Sports Medicine & Wellness Centers can help you.